Doing What We Can 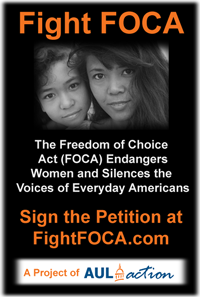 FOCA Would Wipe Away Every Restriction on Abortion Nationwide

This would eradicate state and federal laws that the majority of Americans support, such as:

FOCA would erase these laws and prevent states from enacting similar protective measures in the future.

President-elect Obama has promised to sign FOCA into law first thing when he gets into office.  I don't know how much good petitions do, but every effort must be made to deter the murder of the unborn.

Go to Fight FOCA to sign the petition and learn more about this hideous bill.

Thank you Bridget. I have signed the petition and passed it on to everyone I know. I am going to add the image to my sidebar too.