Our Lady of Charity

This image of Our Lady is traveling among the Knights of Columbus councils in our area.  When it was our council's turn, we had the privilege of having her in our home for a few days. 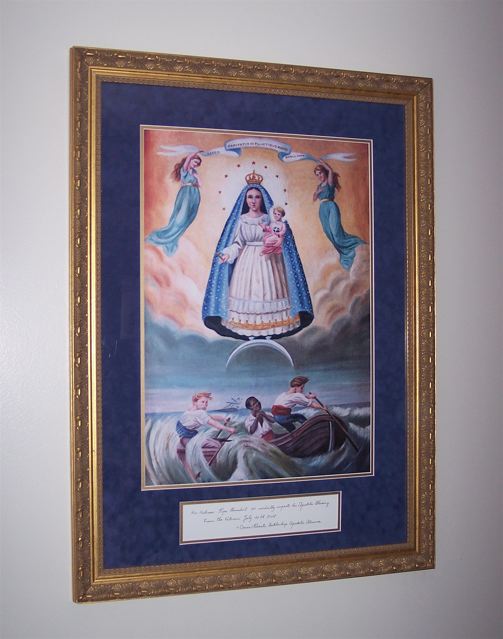 The story of Our Lady of Charity is a rather simple one. Like many other Marian apparitions, it occurred in a nameless place and involved ordinary people.

Around the year 1600, three boys were sent to gather salt needed to preserve the meat of the town’s slaughterhouse, which supplied food for the workers and inhabitants at the Spanish copper mines near Santiago, Cuba. Two of the boys were native Indians and brothers, Rodrigo and Juan de Hoyos, and the third was a 10-year-old black slave, Juan Moreno.

On their way back to Santiago del Prado (modern El Cobre) and halfway across the Bay of Nipe, they encountered a fierce storm that threatened to destroy their frail boat.

Suddenly, the waters calmed. In the distance the boys saw a white bundle floating on a piece of wood that they mistook for a sea bird. In reality, it was a small statue of Mother Mary holding the infant Jesus in her left arm and a gold cross in her right. Inscribed on the wooden board were the words, Yo soy la Virgen de la Caridad (I am the Virgin of Charity).

According to recorded testimony, despite the motion of the ocean waves and the storm, neither the image of Mary nor her white robes were wet.

The crowned head of the original 16-inch-statue is made of baked clay covered with a polished coat of fine white power. Her feet rest on a brilliant moon, while angels spread their golden wings on a silver cloud. The child Jesus raises his right hand as in a blessing, and in his left hand he holds a golden globe. A popular image of Our Lady of Charity includes a banner above her head with the Latin phrase “Mater Caritatis Fluctibus Maris Ambulavit” (Mother of Charity who walked on the road of stormy seas).

The youths brought the statue back to their village of Barajaguas, where a chapel was built and the image venerated by all who heard the story. Much like Our Lady of Guadalupe for the Mayan Indians, Our Lady of Charity instantly became a pilgrimage site, a reminder for the underprivileged that their heavenly Mother cared and stood beside them. El Cobre was to be the first place in Cuba where freedom was won for slaves.

In 1688, the Archdiocese of Santiago, Cuba, initiated the first inquiry into the statue’s mysterious origins in response to the extraordinary and faithful devotion demonstrated by the Cuban people. Surnamed El Cobre — the name of the mining town where her sanctuary was eventually built — Our Lady of Charity was declared the patroness of Cuba by Pope Benedict XV in 1916 at the request of the nation’s bishops and the faithful, with a special appeal by the veterans of Cuba’s War of Independence from Spain.

Posted at 08:59 AM in Catholic Faith | Permalink

Bridgit,
We went to the KC church service when this image came to our area. How nice to see Mary visiting all of you. :)