All year the central focus of the older kids studies at Saint Augustine's Homeschool Enrichment Program has been medieval history.  After Mass we celebrated their hard work with a medieval festival.

The festivities were kicked off with the St. Augustine's Schola performance of sacred music.  The children sang beautifully.  More than one parent was moved to tears at the loveliness of these children's musical voices. 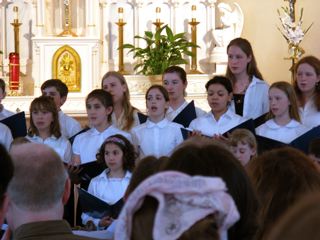 Monica in the center. 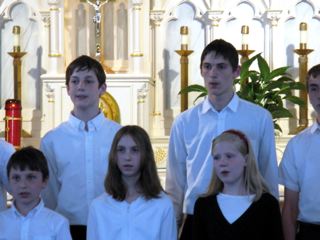 Alex and Kevin in the back.

After schola, some of the students performed a medieval morality play written by a student. The Princesses and the Paupers.  Monica played the princess/pauper, Selfishness. 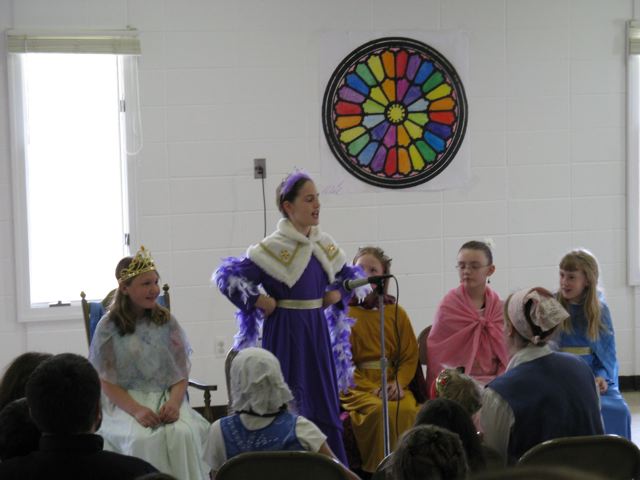 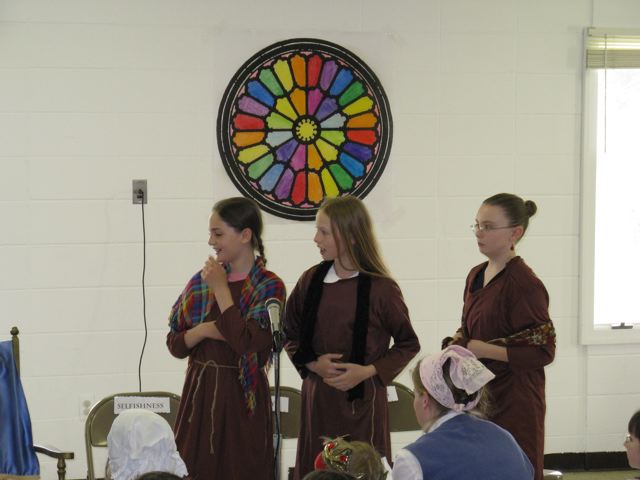 As the festival continued, Kevin demonstrated the proper way for medievals to eat. 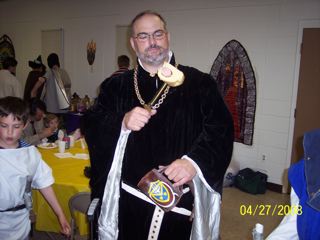 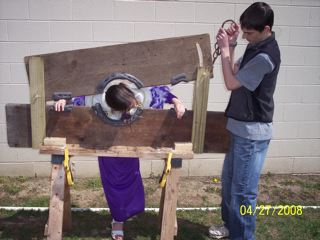 Alex in the blue.  Notice the swords everywhere. 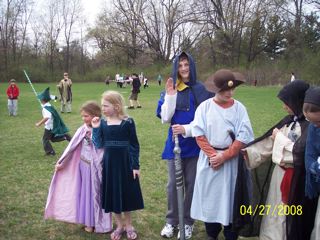 We are so proud of the work and effort by the children this year.  They have had an amazing opportunity to be part of this program and we are immeasurably grateful to the stellar tutors, the Russells who began St. A.'s and are the heart and soul of it, Fr. Gerald for his generous support and for the brilliant, devout, lovely families we have come to know there.  Huzzah! 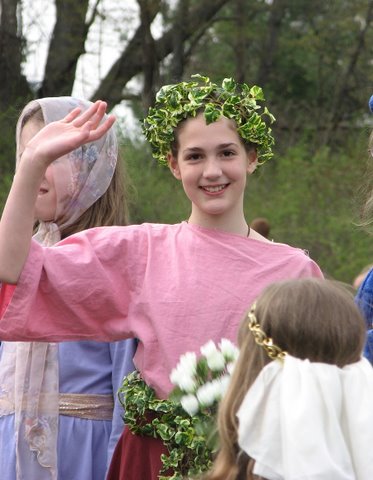 We had a lot going on, a visit from Monica's Godfather, the first lawn mowing of the season, got the laundry caught up (woohoo) and the kids had friends over.

Here are the girls with their friend, E. 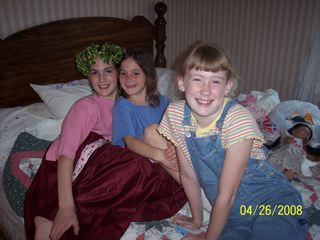 The boys and friends worked on a radio drama they wrote and produced while mom tried hard to keep the littles quiet during recording sessions. (Although with all their loud, dramatic sound effects, I don't think the little kid noise would have been heard in the recording.) 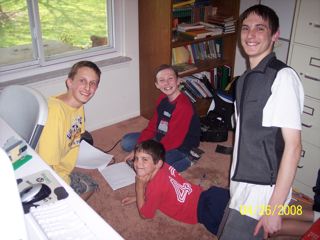 Mary Garden In a Pot 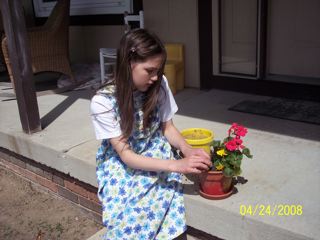 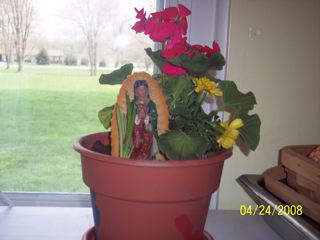 A Must See Photo

I have more to write on Cardinal Arinze's visit and the College of Saints Peter and Paul benefit dinner, if I ever get it together.  But you must see this photo of my Godson/nephew with the Cardinal.  Will gave His Eminence his most charming smiles.  Check it out at Will Wonders Never Cease.

Riding in the van Maria was making ugly screeching noises.  I sarcastically told her that she was charming. She replied indigently, "I not charming, I'm amusing."

Mass With the Cardinal

Kevin and I were invited to attend a private Mass celebrated by Cardinal Arinze.  He was in town to give the key note address at the benefit dinner of the College of Saints Peter and Paul.  His Eminence was staying at the beautiful Scripps Estate and celebrated Mass there in the chapel.

What a gift and a fortification of faith to be able to hear him pray Holy Mass.  I offered my fervent prayers for all my pregnant friends at this Mass.

After Mass we had a lovely breakfast in the dining room of the estate.  We found Cardinal Arinze to be warm, funny and very down to earth.  His ability to joke and tease demonstrates his command of English.

What a blessing to the Church! While We've Been Busy

What an exciting time for Catholics!   The Holy Father is in the country, Cardinal Arinze is in our state and a new Catholic college is being born!

Kevin and I have been helping with the second annual benefit dinner for the College of Saints Peter and Paul.  This involves a few meetings and quite a bit of computer time in the days preceding the dinner.  The kids have really been fabulous about our busyness and the older kids help with the youngers, but we got a chuckle out of the pictures we found in the camera.  I think they entertained themselves well, but they need a mom again. 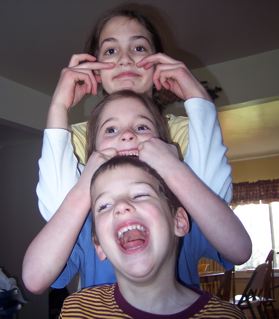 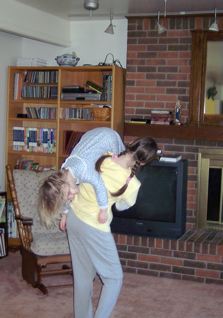 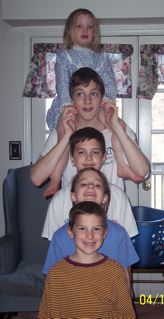 Strong words from Bishop Carl Mengling about passing on the faith to our children, said during a confirmation Mass.

"We need Catholic parents who will not betray their children."

Hi my name is Blaise.  Today I am going to write about our pets. Their names are D.C and Jelly Bean, well those are the cats, the dog’s name is Cuchullain.  So far he has been okay with the cats.

Cats catch lots of mice and D.C. caught a
chip-monk. But he got away.  By the way, D.C.
Stands for Darn Cat we didn’t name Him that for
any real reason, except the Disney movie cat. But He lives up to it.  Oh, and
Jellybean caught a snake! D.C. got hurt by
a stray white cat but he’s okay.  Here is a picture of me and D.C. 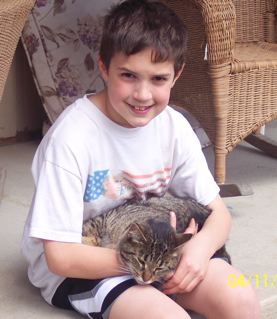 Sharon asked me, a while ago, (blush) to post my pancake mix.

Combine all ingredients and whisk well.

(Depending on the flour mixture you may need a little more water.  I just mix till it looks right.)

I store the mix in this box in my pantry. 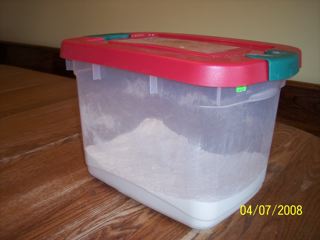