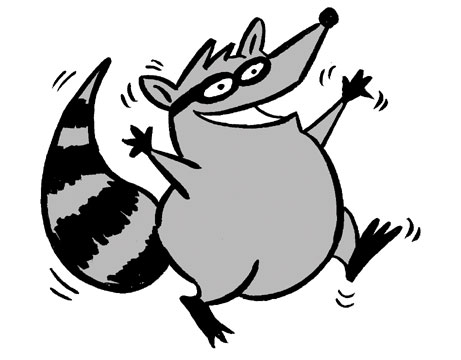 Rowdy raccoons from far and wide gathered to enjoy their annual cherry fest.  They spent the night up and down the cherry tree, clicking to each other, occasionally growling when another gets too close to an occupied branch and consuming mass quantities of cherries.

Festival organizers estimate attendance to be at about a dozen masked creatures.

Security personnel were concerned about the safety of local chickens but there were no reported incidents.

However, there were reported problems with the local swimming pool.  It seems that inebriated festival participants wandered over to the pool for a drink and inadvertently started a waterfall by pushing too hard on the pool's edge.  In amazing clarity of thought and speed for the middle of the night, security was able to respond and mitigate water loss.

Local authorities are considering options to change the venue for future raccoon cherry festivals.  Fest organizers say they are disappointed and will fight any efforts to move the annual event.

Today was the Feast of Corpus Christi.   I love this feast.  Christ's gift to us of His Body and Blood is everything.  On this day we honor Him in a public way with a Eucharistic procession. 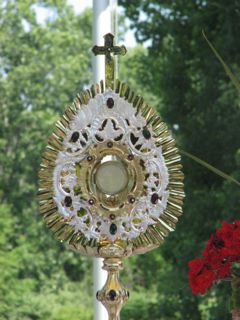 The crowd was large and reverent.  The sky was clear and as blue as can be.  The Knights of Columbus were in full regalia, the First Communicants in their white dresses and veils.  It was an outpouring of love for our  Lord. 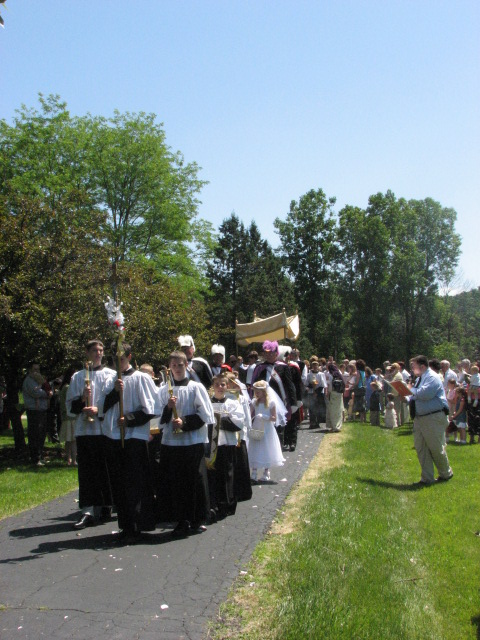 Our family had the honor of decorating one of the altars. 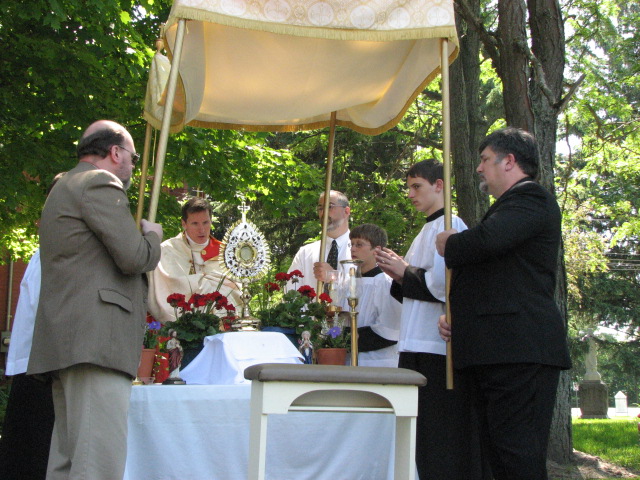 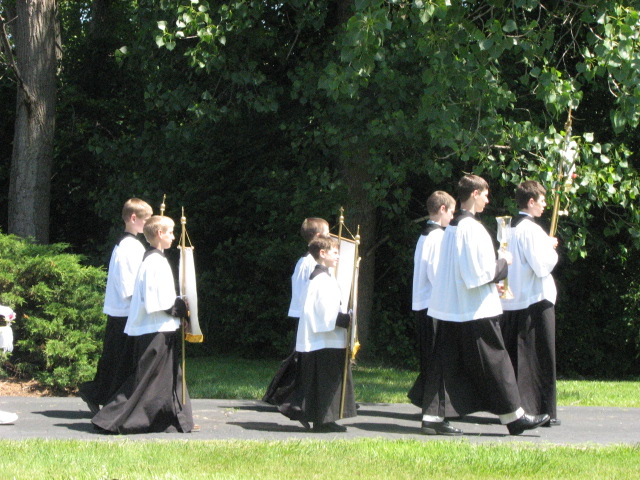 Kevin was a asked to be a canopy bearer. 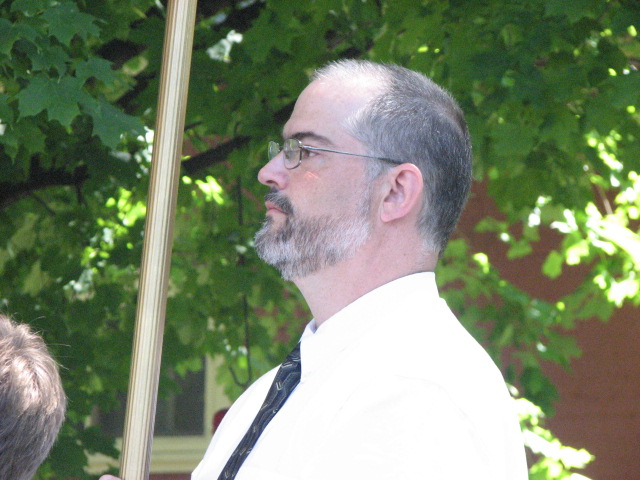 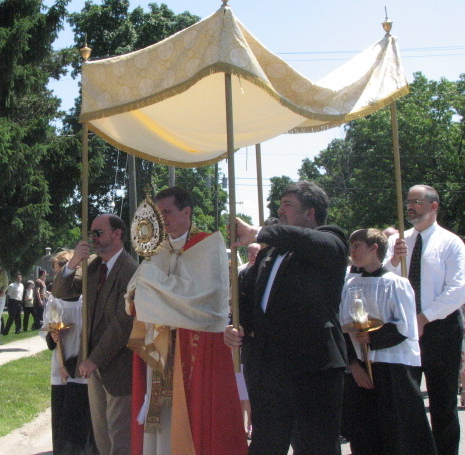 O Sacrament most holy,
O Sacrament divine!
All praise and all thanksgiving
Be ev'ry moment Thine.

I Could Be Worse

It was a rough day here yesterday.  I was a little stressed.  That translates to mom being crabby and impatient with the children.

We were watching the movie Seven Brides for Seven Brothers.  In one of the early scenes it shows the seven brothers displaying atrocious manners at the dinner table.  In anger, Millie, upsets the whole table turning it on it's side.

At this Regina turned to me and said "At least you have never been that crabby, mom.  At least you never turned over a table."

Yes dear, at least I haven't done that.   Such a comforting thought to cling to. 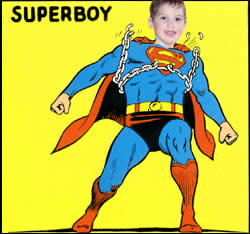 After his episode the other day, we thought we would show you a recent picture of our Superboy!  And thanks to Theresa (who has a Superboy of her own) for the idea  ;-)

Because we adore Suzanne, and because we are happy to be in skirts and dresses, we could not be left out of the Carnival of Everyday Summer Skirts and Dresses.  Monica lit a fire under us so we decided to do pictures of cute summer dresses, in cute summer barn boots with our cute summer chickens.  (It was actually Alex's chicken chore day but he was willing to sacrifice for the sake of the photo shoot.)  The girls are in play dresses and I am wearing my work skirt. 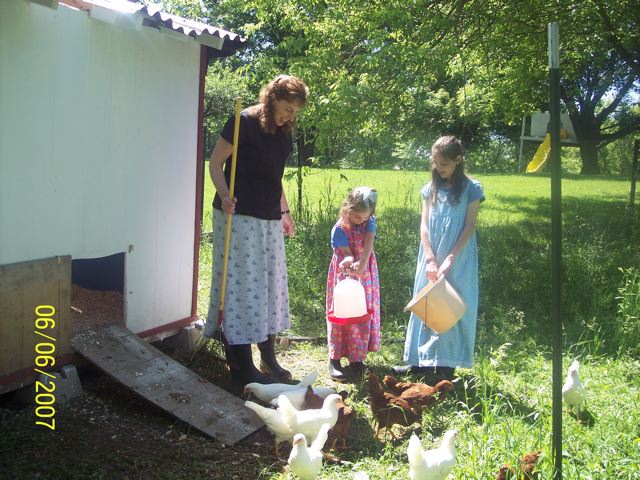 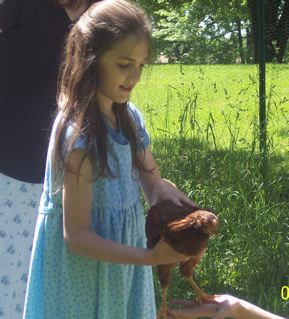 Nissa has put up a sweet, fun Carnival Of Washing Lines .  Nothing like the scent and feel of line dried sheets and clothes.

If hands on / Montessori learning is of interest to you,  go read Donna Marie's post on Montessori Trays , it will inspire you to put some together.

Make sure to visit Suzanne to read her lovely Carnival of Everyday Skirts and Dresses  , she has many great photos and links.

Three year old Paul Bunyan broke the  STEEL! child safety lock on the door.  He figured he would just bust his way out. 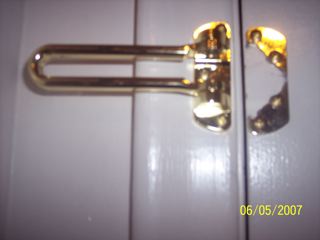 ETA:  Here is the other door, this is what the lock is supposed to look like.  He didn't even break it at a seam! 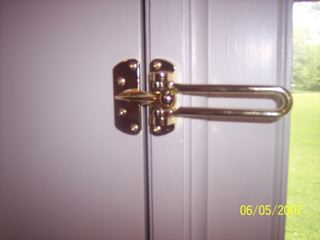 We learned long ago not to take too long a break from certain subjects in summer.  We keep working on math, handwriting and English.  I clean out the children's school bins and leave the books for those subjects and any other subject that was a favorite.  They each have four or five things to work on daily.  Usually just a page or two each day, nothing too daunting.

I also try to keep each child's bin supplied with books I think they will enjoy.   There is a stack of our favorite summer picture books for me to read to the younger crowd.  During the hottest part of the day we hunker down in the house to cool off and read.

Speaking of cooling off, we got our pool set up and fresh sandbox sand.  Our own beach.  Good thing, since gas prices will keep us home a lot this season.  Add a good supply of popsicles and we're good. 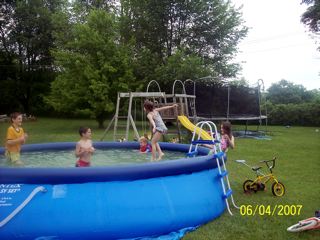 "Though many are strong, you alone always overcome. And who will withstand the strength of your arm? For, like a tiny grain on a scale, just so is the world before you, and like a drop dew before dawn, which descends upon the earth. But you are merciful to all, because you can do all, and you dismiss the sins of man because of repentance. For you love all things that are, and you hate nothing of the things you have made; for you would not have created or established anything that you hated. For how could anything endure, except by your will? Or what, having been called by you not to exist, would be preserved? Yet you spare all things, because they are yours, O Lord, who loves souls."  -Wisdom 11:21-27

I learned a lot from my brother Bill.  Things he never set out, as an older brother, to teach me, for example: we should pursue truth; that there is a right way for a man to conduct himself (prudence), to respect others and give them their due (justice); and that it is good to restrain oneself at times (temperance). He's been an example of fortitude and courage; as well as faith, hope and charity. He is a man of virtue.